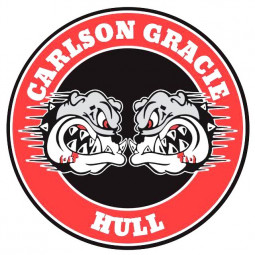 About Carlson Gracie Hull
Founded by the legendary Carlson Gracie Senior, the Carlson Gracie Team has it’s roots in Rio and more recently Chicago. Carlson Gracie UK is part of a global jiu-jitsu family with an ethos built on the teachings of, and the indomitable spirit demonstrated by the late grand master. As long time English Open team champions, IBJJF London Summer Open team champions 2015 and Surrey Open team Champions 2014 and 2015, the Carlson Gracie team is amongst the most successful jiu-jitsu teams in the UK. On the mats at the Hull Gym, you can expect to find hobbyists and beginners working alongside competitive jiu-jitsu Practitioners and high level judo and MMA athletes. The roots of our success lay in the first class tuition and the strong team spirit for which the Carlson Gracie team is famed. Adult Classes at Carlson Gracie Hull will be taught by Head Instructor Owen Livesey. Kids classes will begin in the not so distant future and will be taught by Owen Livesey and Julia Scardone. Carlson Gracie Senior was the Gracie family champion of the 1950s and 1960s, he would demonstrate the success of his art in challenge matches against other styles, but perhaps his greatest legacy was his desire to share his jiu-jitsu with the world, Carlson would teach all who cared to learn. Here at Carlson Gracie Hull we continue this legacy; jiu-jitsu is for everyone so whether your goals are self defence, to get in shape, to be part of the community, or to compete in BJJ/MMA, we can help you achieve your goals. We are located in Unit B3, Chamberlain Business Park, Chamberlain Road, Hull, HU8 8HL. Car Park spaces located at the front. Please Contact if you wish to book your FREE trial class.